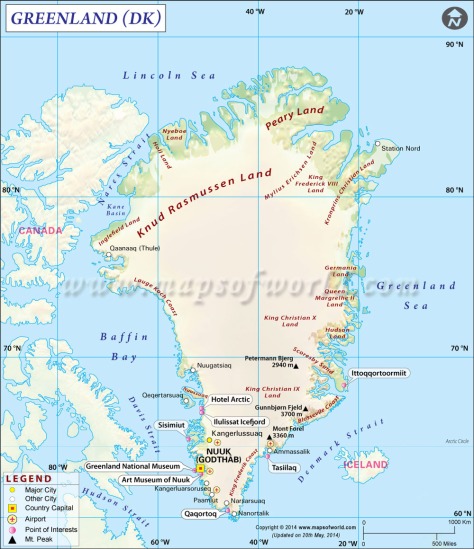 Greenland is an autonomous country within the Kingdom of Denmark, located between the Arctic and Atlantic Oceans, east of the Canadian Arctic Archipelago. Though physio-graphically a part of the continent of North America, Greenland has been ethnically, politically and culturally associated with Europe (specifically Norway and Denmark, the colonial powers, as well as the nearby island of Iceland) for more than a millennium. In 2008, the people of Greenland passed a referendum supporting greater autonomy; 75% of votes cast were in favor. 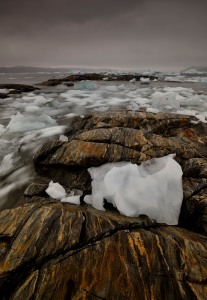 Greenland is the world’s largest island, over three-quarters of which is covered by the only contemporary ice sheet outside of Antarctica. With a population of about 56,370 (2013), it is the least densely populated country in the world.

Greenland has been inhabited off and on for at least the last 4,500 years by Arctic peoples whose forebears migrated there from what is now Canada. Norsemen settled the uninhabited southern part of Greenland, beginning in the 10th century, and Inuit peoples arrived in the 13th century. The Norse colonies disappeared in the late 15th century. In the early 18th century, Scandinavia and Greenland came back into contact with each other, and Denmark established sovereignty over the island.

Having been claimed by Denmark–Norway for centuries, Greenland became a Danish colony in 1814, and a part of the Danish Realm in 1953 under the Constitution of Denmark. In 1973, Greenland joined the European Economic Community with Denmark. However, in a referendum in 1982, a majority of the population voted for Greenland to withdraw from the EEC (later expanded into the E.U.), which was effected in 1985. In 1979, Denmark had granted home rule to Greenland, and in 2008, Greenlanders voted in favor of the Self-Government Act, which transferred more power from the Danish royal government to the local Greenlandic government. 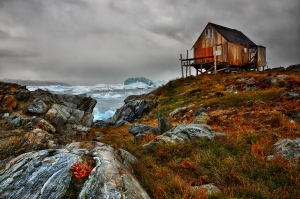 Under the new structure, in effect since 21 June 2009, Greenland can gradually assume responsibility for policing, judicial system, company law, accounting, and auditing; mineral resource activities; aviation; law of legal capacity, family law and succession law; aliens and border controls; the working environment; and financial regulation and supervision, while the Danish government retains control of foreign affairs and defense. It also retains control of monetary policy, providing an initial annual subsidy of DKK 3.4 billion, planned to diminish gradually over time as Greenland’s economy is strengthened by increased income from the extraction of natural resources. 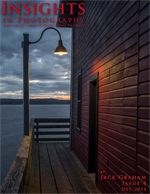