Iceland is a Nordic island country between the North Atlantic and the Arctic Ocean. It has a population of 329,100 and an area of 40,000 sq. miles, giving the island the lowest population density of any country in Europe.

The capital and largest city is Reykjavík. Reykjavík and the surrounding areas in the southwest of the country are home to over two-thirds of the population.

Iceland is volcanically and geologically active. The interior consists of a plateau characterized by sand and lava fields, mountains and glaciers, while many glacial rivers flow to the sea through the lowlands. Iceland is warmed by the Gulf Stream and has a temperate climate, despite a high latitude just outside the Arctic Circle.

Iceland is best known as the home of the first Viking explorers of North America, in the year 986. Its inhabitants are descended from Norse and some Celtic (mainly Irish and Scottish) peoples [mainly slaves and wives of the Norse men]. Currently, they also include some other arrivals from Europe. 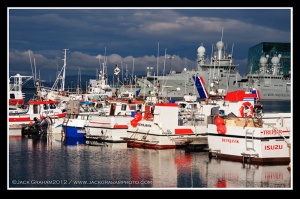 Until the 20th century, Iceland relied largely on fishing and agriculture. Industrialization of the fisheries and Marshall Plan aid following World War II brought prosperity and Iceland became one of the wealthiest and most developed nations in the world. In 1994, Iceland became party to the European Economic Area, which supported diversification into economic and financial services.

Icelandic culture is founded upon the nation’s Scandinavian heritage. Most Icelanders are descendants of Germanic and Gaelic (Celtic) settlers. Icelandic, a North Germanic language, is descended from Old Norse and is closely related to Faroese and West Norwegian dialects. The country’s cultural heritage includes traditional Icelandic cuisine, Icelandic literature and medieval sagas. Iceland has the smallest population of any NATO member and is the only one with no standing army, its lightly armed coast guard being in charge of defense.